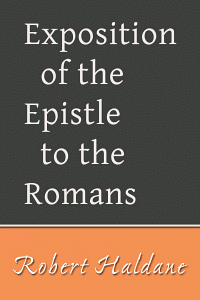 Look Inside
Exposition of the Epistle to the Romans
By: Robert Haldane (Author)
Publisher: Wordsearch
Category: Commentaries

An Exposition of the Epistle to the Romans, is one of the best-known and well respected commentaries on this Epistle. Haldane's writing style both teaches and inspires.

About the Author:
Robert Haldane was born in London in 1764. After attending classes at Dundee Grammar School and in the Royal High School and University of Edinburgh, in 1780 he joined HMS Monarch. In 1783 he left the Royal Navy, and soon afterwards settled on his estate of Airthrey, near Stirling.

The earlier phases of the French Revolution excited a sympathy which induced Haldane to avow his strong disapproval of the war with France. As his over-optimistic visions of a new order of things to be ushered in by political change disappeared, he began to direct his thoughts to religious subjects. Resolving to devote himself and his means wholly to the advancement of Christianity, his first proposal for that end, made in 1796, was to organize a vast mission to Bengal, of which he was to provide the entire expense; with this view the greater part of his estate was sold, but the British East India Company refused to sanction the scheme, which therefore had to be abandoned.

In 1797 Haldane sold his castle, left the Church of Scotland and travelled around Scotland preaching. In December of that year he joined his brother and some others in the formation of the "Society for the Propagation of the Gospel at Home," in building chapels or "tabernacles" for congregations, in supporting missionaries, and in maintaining institutions for the education of young men to carry on the work of evangelization. He is said to have spent more than £70,000 in the course of the following twelve years (1798-1810). He also initiated a plan for evangelizing Africa by bringing over native children to be trained as Christian missionaries. In 1816 he visited the continent, and first at Geneva and afterwards in Montauban (1817) he lectured and interviewed large numbers of theological students with remarkable effect; among them were Malan, Frédéric Monod and Jean-Henri Merle d'Aubigné. Returning to Scotland in 1819, he lived partly on his estate of Auchengray and partly in Edinburgh, and like his brother took an active part, chiefly through the press, in many of the religious controversies of the time.

In 1816 he published a work on the Evidences and Authority of Divine Revelation, and in 1819 the substance of his theological prelections in a Commentaire sur l'Epitre aux Romains. Among his later writings, besides numerous pamphlets on what was known as "the Apocrypha controversy," are a treatise On the Inspiration of Scripture (1828), which passed through many editions, and a later Exposition of the Epistle to the Romans (1835), which has been frequently reprinted, and has been translated into French and German.

Dr. Chalmers styled this "a well-built commentary," and strongly recommended it to students of theology. In his "Sabbath Readings" he writes: "I am reading 'Haldane's Exposition of the Epistle to the Romans,' and find it solid and congenial food.