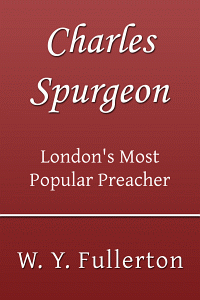 This biography, Charles H. Spurgeon, by W.Y. Fullerton, draws from Fullerton's close friendship with Spurgeon and gives an intimate portrait of Spurgeon's life and experiences. First published in 1920, it is well-chronicled and well-organized.

William Young Fullerton ( 8 March 1857 -17 August 1932) was a Baptist preacher, administrator and writer. He was born in Belfast, Ireland. As a young man, he was influenced by the preaching of Charles Spurgeon, who became his friend and mentor. Fullerton served as President of the Baptist Union and Home Secretary of the Baptist Missionary Society. He was a frequent speaker at Keswick Conventions. His published works include biographies of John Bunyan, Charles Spurgeon, James William Condell Fegan and Frederick Brotherton Meyer; missionary histories and devotional writings. He also compiled several hymnals. He is remembered for his hymn entitled "I Cannot Tell", which he set to the traditional Irish melody "Londonderry". He died at Bedford Park, Middlesex, at the age of 75.