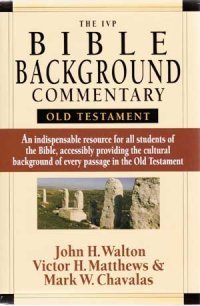 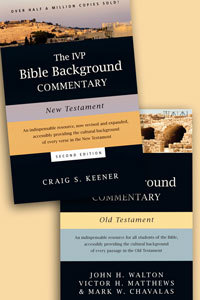 To understand the Bible, understanding the cultural background of each passage is important in helping you to know the author’s purpose for writing the book and why they did.

The IVP Bible Background Commentary is a unique, accessible commentary that helps you discover what it was like to actually be there when you are reading the Bible. Verse-by-verse, you are given all the background information you need to understand the local manners and customs of ancient times and cultures. You’ll become aware of what the people in the Bible were thinking and what was going on in their daily lives. Reading this work will shed valuable light that will even help your other commentaries make more sense.

The Old Testament volume covers the narratives, genealogies, laws, poetry, proverbs, and prophecies and their histories, bringing to life the discoveries of archaeologists, historians, and social scientists. The specialized knowledge of the historical, cultural, and social background for each book of the Old Testament is included, written in an understandable way.

Knowing the background of the Bible can help you in sermon preparation, Sunday school lessons, seminary students, and anyone who wants to deepen their study of the Bible.

Check out a sample of this series by clicking on the yellow “Sample” button under the book cover on this page.

John H. Walton earned his Ph.D. in 1981 in Hebrew and Cognate Studies, at the Hebrew Union College-Jewish Institute of Religion, in Cincinnati, Ohio. For twenty-five years he was active at South Park Church in Park Ridge, Illinois teaching at every level from adults through pre-school. He came to Wheaton College after twenty years of teaching at Moody Bible Institute. He is currently the professor of Old Testament and has been on the faculty since 2001.

Victor H. Matthews received his Ph.D. from the Department of Near Eastern and Judaic Studies at Brandeis University in 1977. He taught at Clemson University (1978-80) and Anderson College (1980-84) in South Carolina, before joining the Department of Religious Studies at Missouri State University in 1984 as Professor of Hebrew Bible/Old Testament. His field of research is ancient Near Eastern history and the social world of ancient Israel. He is now serving as the Dean of the College of Humanities and Public Affairs, but will continue to teach courses in Religious Studies.

Mark W. Chavalas is Professor of History at the University of Wisconsin-La Crosse, where he has taught since 1989. His Ph.D. is from UCLA, where he studied ancient Near Eastern history, archaeology, and languages, specializing in Mesopotamia. He has taught courses on ancient Near Eastern history, archaeology, and the Akkadian language. He has had fellowships from various universities, including Yale, Cal-Berkeley, Brown, Cornell, the University of Arizona, and Wisconsin-Madison. He also has had nine seasons of archaeological field experience in Syria at Tell Ashara/Terqa, Tell Qraya, and Tell Mozan/Urkesh. He is a past president of the American Oriental Society Middle West, formerly on the Board of Directors of the American Oriental Society, and is currently on the Board of Trustees for the American Schools of Oriental Research.

The IVP Bible Background Commentary: Old Testament is a treasure of information crucial to enriching your understanding of the Bible. The authors are experts in the field of Old Testament and its ancient Near Eastern world and present the fruits of their research in an extremely accessible way to allow modern readers to bridge the horizon back to the ancient context of the Bible.