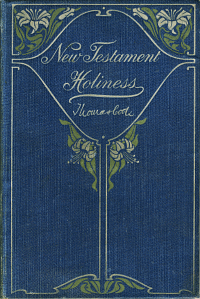 New Testament Holiness by Thomas Cook — is a classic textbook still used today by Bible Colleges and Seminaries on the topic of Holiness. Thomas Cook, focuses on the total cleansing of sin. The desire for heart purity is a creation of the Holy Spirit at work in the heart of the believer.

Thomas Cook was born in Middlesbrough, Yorkshire, in 1859. Cook was converted to Christ at the age of sixteen. Very soon after his conversion, Cook began preaching in the open-air with another young friend, and developed a great thirst to win others for Christ. All that he knew to preach was the simple message that he was a sinner, and that Christ had forgiven him.

Over the next two years, in special rooms operated by the Mission Band in Middlesbrough, Cook was trained for the ministry. The famous preacher, Dr. Morley Punshon, visited Middlesbrough, and appealed for men to enter the ministry. Thomas Cook made an inward response to that call, and he knew that God accepted this response. He was accepted by the Local Preachers meeting, and studied to qualify. Seeing that he had already been preaching in the open-air for some time, he immediately began preaching in the chapels as well. He preached many evangelistic sermons, aiming always at immediate response to the Gospel. Other denominations began to approach him to join their ranks, but he felt a loyalty to the Wesleyan Methodists.

Cook was involved in several missions where a good deal of success was enjoyed, and in November, 1880, the Chairman of the Halifax and Bradford Wesleyan District asked Cook to become a lay evangelist in this District. Thomas Cook recognized the hand of God in this invitation, and he promptly accepted the offer. He commenced this work on 21st of November. He was sent to some of the smallest and most unfruitful circuits in the District, where revivals were only known about in history books, and he also worked in some of the largest churches. Everywhere he went the reports were similar, unusually large congregations gathered and many were converted.

Cook applied to the July Conference of 1881 to train for the ministry, and he was accepted. But, instead of sending him to a Theological College, he was sent back to the Halifax and Bradford District to continue his evangelism. Cook went on three overseas evangelistic tours. The first tour was to Norway, and occurred in 1886. The second was to South Africa, from April, 1892 through November. The third tour was to Australasia and Ceylon, and covered the best part of two years.

After returning to England, he continued in evangelistic work for several years. But, as time passed, it became evident that his health had been undermined, and was becoming badly affected by the strenuous nature of his work. In due course, he withdrew from direct evangelism and became Principal of Cliff College. He played a major role in the development of this college into a training place for lay evangelists. He died on 21st, September, 1912, at the age of 53, and is buried in the church yard near the college.