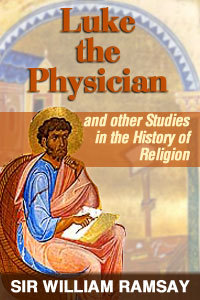 Look Inside
Luke the Physician
and Other Studies in the History of Religion
By: William Mitchell Ramsay (Author)
Publisher: Wordsearch
Category: History & Culture

Sir William Ramsay was one of the foremost archaeologists of the nineteenth century — and an avowed atheist. Luke the Physician is a collection of papers written by Ramsay that served as his proof texts of the accounts of the Book of Acts and the Gospel of Luke. Ramsay was especially impressed how small, seemingly "insignificant" geographical details were recorded exactly right in Luke's accounts. That, Ramsay claimed, that was the mark of a writer who knows what he is talking about and is careful to tell everything correctly. In fact, Ramsay became so impressed with the truth of Luke's account that it led him to accept Christ.