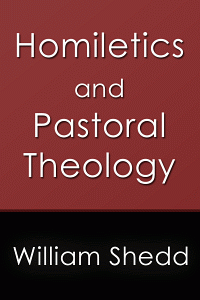 This volume was used for many years as a standard textbook in several theological seminaries throughout the United States. Dr. Shedd expounds almost every aspect of preaching; analyzing its nature, outlining the main features which should characterize powerful preaching and describing the approach, plan, actual construction and refinements of a sermon.

The second part of the volume is devoted to the vital subject of Pastoral Theology. Here Dr. Shedd is equally thorough and deals with the essential character of a minister, his way of life, his duties, his work of visitation and finally, his work of catechizing his people so as to be informed as to their progress and position in relationship to the preaching.

These studies focus on the preparation and delivery of Biblical messages and conclude with the an assessment of pastoral theology.