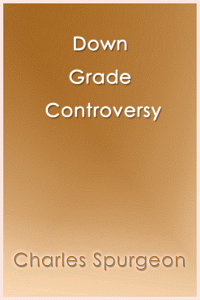 The "Down Grade" Controversy is a compilation of original materials, including The Sword and the Trowel Magazine, C. H. Spurgeon's Autobiography by Mrs. Spurgeon and J. W. Harrald, and the Metropolitan Tabernacle Pulpit sermon volumes.

The "Down Grade" Controversy was one of the most significant disputes in the life of C. H. Spurgeon, occurring near the close of his comparatively short life of almost 58 years. It began in 1887 and continued on until — and even after — his death in 1892. He indicated in an editorial "note" in the very last days of his life that the controversy probably contributed to his early demise. He said: "To be free from all ecclesiastical entanglements is to the Christian minister a blessing worth all it has cost, even though an almost fatal illness might be reckoned as part of the price."

The "Down Grade" controversy took place at a time when there was profound theological unrest, "with sweeping changes in many realms of thought, and with the unusual dangerous tendency for many to accept the latest hypotheses as proven theories". Spurgeon and other ministers were alarmed at the opinions being expressed about the divinity of Christ, the atonement, resurrection and inspiration.