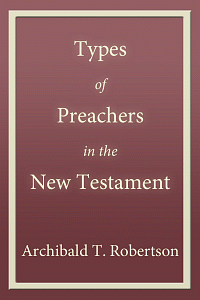 Types of Preachers in the New Testament discusses the lives of some of the minor characters such as: Apollos, Barnabas, Aquila and Priscilla, James the Man of Poise, Philemon, Stephen, Lydia, Silas, Titus, Timothy, Thomas, Philip, Matthew, Judas, Diotrephes, and Epaphroditus.