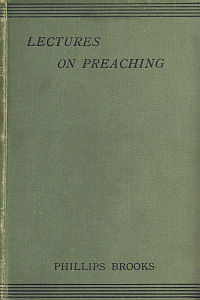 Phillips Brooks' Yale lectures were originally published as Lectures on Preaching in 1895. This is a classic that should be read by every minister of the Word. Brooks emphasizes and elaborates on the role that the preacher plays in the communication of God's Word.

About the Author
Dr. Phillips Brooks (1835-1893) has been called "the greatest American preacher of the nineteenth century." He attended the Boston Latin School, Harvard University (where Phillips Brooks House was named after him) and the Virginia Theological Seminary. He became an Episcopal priest in 1860 and served in Philadelphia, Pennsylvania. He was known for his support of freeing the slaves and allowing former slaves to vote. In 1869, he became rector of Trinity Church in Boston. In 1872, he helped design the Trinity Church building which stands in Boston's Back Bay today. In 1891, he became Episcopal bishop of Massachusetts. Brooks also wrote the famous hymn "O Little Town of Bethlehem." He also delivered the sermon at President Abraham Lincoln's funeral.