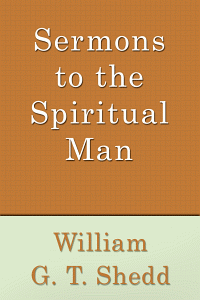 In this companion volume to Sermons to the Natural Man Dr. Shedd aims to address the human heart. This work supposes forgiven and indwelling sin, and would aid in the struggle and victory over it.

Classic sermons from one of the greatest theologians of the late 19th century. What a fabulous collection os sermons!