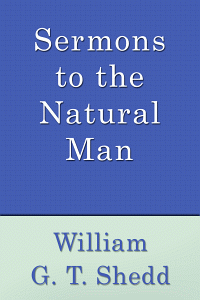 Sermons to the Natural Man are sent out into the world, with the prayer that God the Spirit will deem to employ them as the means of awakening souls from the lethargy of sin, and endeavor to produce the consciousness of it.

Sermons to the Natural Man' are, if not absolutely the best, yet of the very best doctrinal and spiritual sermons produced in this generation. We have known much of their power in convincing sinners, and in deepening, widening and exalting the experience of true Christians. Doctrinal preaching, though not in fashion, is the preaching that we need, and the preaching which always best vindicates itself when put to the test of practice. And of all the examples of doctrinal preaching in this generation, the sermons of Dr. Shedd excel in many particulars. He grasps the very heart and soul of the truth. He holds it in its entirety with uncompromising loyalty; he states it with wonderful clearness and accuracy, and illustrates and applies it with singular facility and grace of style.