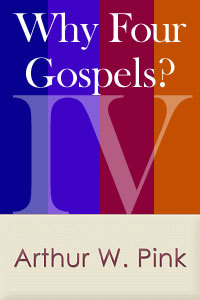 A.W. Pink's detailed examination of the Gospels offers unique insights on how each author viewed our Lord and Savior. Pink puts forth the notion that each writer of the Gospel views Christ in a different relationship: Matthew; as King, Mark; as Servant, Luke; as Son of Man, and John; as Son of God. He also adds the character of the Holy Spirit, and the Spirit's impact on the harmony of the gospels.