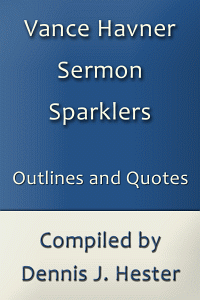 The heart of more than a hundred of Vance Havner's inimitable sermons has been captured in this unusual collection. Some outlines are seed thoughts, yet strong and rich enough to support a fleshed-out sermon. Others are mini-sermons which can clearly spell out the shape and direction of a longer message. Havner's sharp mind and compassionate heart produced down-to-earth, Bible-centered, powerful messages. Many of his finest sermons are represented in this compilation.

An added feature is the collection of several incisive quotations Havner used to illustrate his sermons. Alphabetically listed by topics, the material may be easily identified and used by today's sermon makers.

Dennis J. Hester is an Intentional interim minister, church consultant and conductor of the "Making Good Churches Better" seminars and workshops. Hester has formally pastored in North Carolina, South Carolina and Virginia, and he is the author of Pastor, We Need to Talk: How Congregations and Pastors Can Solve Their Problems Before It's Too Late. Hester has compiled four books on Havner's sermons and devotional material.

Vance Houston Havner was born October 17, 1901, in the Western North Carolina locality of Jugtown. Though his ministry eventually took him to major cities throughout America, Dr. Havner maintained a love for the quiet and simple ways of his more rural past. His academic experience began at Hog Hill, Jugtown's schoolhouse. Later, he attended schools such as South Fork Institution, and Boiling Springs High School, which later became Garner-Webb College. He also attended Catawba College, Wake Forest University, and Moody Bible Institute.

Dr. Havner's first pastorate was at the Salem Baptist Church in Weeksville, North Carolina. While serving at Salem Baptist Church, the first of his 38 books was published, By the Still Waters. In 1934, Havner went to Charleston, SC to serve as pastor of the First Baptist Church. Later, he was called to an itinerant ministry of evangelism and conference speaking, and it was in this capacity that his greatest contributions were made.

His influence extended to a national level, but Dr. Havner's approach was always to minister where God directed, regardless of the size of the church. His appeal and influence transcended denominational lines, and he spoke to many different groups of people. In addition to preaching in many of America's most influential churches, Dr. Havner was a highly sought speaker for conferences at places such as Moody Bible Institute in Chicago. He frequently spoke at both state and national meetings of the Southern Baptist Convention.

In 1973, he was named "Preacher of the Year," by the Billy Graham Evangelistic Association. Protestant leaders from many denominations called Havner, "The Dean of America's Revival Preachers." His unique sense of humor endeared him to many, and Havner could choose the right words to express a truth like no other communicator. He was truly gifted with an ability to phrase a thought in such a way, as to drive home a point with absolute effectiveness. Though Dr. Havner died in 1986, his influence for Christ continues.