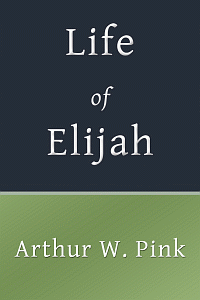 Arthur Walkington Pink, originally wrote and published "The Life of Elijah" as a series of articles in his monthly magazine, Studies in the Scriptures, from January 1940 through December 1942. Throughout the Bible, Elijah has gripped the thought and imagination of preachers and writers in all ages. His sudden appearance out of complete obscurity, his dramatic interventions in the national history of Israel, his miracles, his departure from earth in a chariot of fire all serve to that end.

An in-depth study. Revealing and challenging.