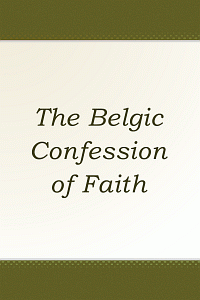 During the sixteenth century the churches in this country were exposed to the most terrible persecution by the Roman Catholic government. To protest against this cruel oppression, and to prove to the persecutors that the adherents of the Reformed faith were not rebels, as was laid to their charge, but law-abiding citizens who professed the true Christian doctrine according to the Holy Scriptures, de Bräs prepared this confession in the year 1561. In the following year a copy was sent to King Philip II, together with an address in which the petitioners declared that they were ready to obey the government in all lawful things, but that they would "offer their backs to stripes, their tongues to knives, their mouths to gags, and their whole bodies to the fire," rather than deny the truth expressed in this confession. Although the immediate purpose of securing freedom from persecution was not attained, and de Bräs himself fell as one of the many thousands who sealed their faith with their lives, his work has endured. In its composition the author availed himself to some extent of a confession of the Reformed churches in France, written chiefly by John Calvin, published two years earlier.

The work of de Bras, however, is not a mere revision of Calvin's work, but an independent composition. In 1566 the text of this confession was revised at a synod held at Antwerp. In the Netherlands it was at once gladly received by the churches, and it was adopted by national synods held during the last three decades of the sixteenth century. The text, not the contents, was revised again at the Synod of Dort in 1618-19 and adopted as one of the doctrinal standards to which all officebearers in the Reformed churches were required to subscribe. The confession stands as one of the best symbolical statements of Reformed doctrine.