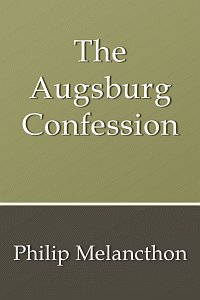 In 1530, Charles V, Emperor of the Holy Roman Empire, called together the princes and cities of his German territories in a Diet at Augsburg. He sought unity among them to fend off the attacks of Turkish armies in Eastern Austria. He called upon the Lutheran nobility to explain their religious convictions, with the hope that the controversy swirling around the challenge of the Reformation might be resolved. To this end, Philip Melanchthon, a close friend of Martin Luther and a Professor of New Testament at Wittenberg University, was called upon to draft a common confession for the Lutheran Lords and Free Territories. The resulting document, the Augsburg Confession was presented to the Emperor on June 25, 1530.

The confession was presented to Charles V in both Latin and German. Minor differences between the two texts exist. Some editions published today print English translations from both. Our texts come from an edition published in 1930's by the Lutheran Church—Missouri Synod, under the title: Concordia Triglotta.

Philipp Melanchthon, born Philipp Schwartzerd, (1497–1560) was a German professor and theologian, a significant character in the Protestant Reformation, a key leader of the Lutheran Reformation, and a friend and associate of Martin Luther.

Melanchthon was born at Bretten near Karlsruhe. In 1507 he was sent to the Latin school at Pforzheim, the rector of which, Georg Simler of Wimpfen, introduced him to the study of the Latin and Greek poets and of the philosophy of Aristotle. But he was chiefly influenced by his great-uncle, Johann Reuchlin, the great representative of humanism, who advised him to change his family name, Schwarzerd (literally Black-earth), into the Greek equivalent Melanchthon (Μελάγχθων).

Not yet thirteen years old, he entered in 1509 the University of Heidelberg where he studied philosophy, rhetoric, and astronomy/astrology, and was known as a good Greek scholar. Being refused the degree of master in 1512 on account of his youth, he went to Tübingen, where he pursued humanistic and philosophical studies, but devoted himself also to the study of jurisprudence, mathematics, astronomy/astrology, and even of medicine.

When, having completed his philosophical course, he had taken the degree of master in 1516, he began to study theology. Under the influence of men like Reuchlin and Erasmus he became convinced that true Christianity was something quite different from scholastic theology as it was taught at the university. But at that time he had not yet formed fixed opinions on theology, since later he often called Luther his spiritual father. He became conventor (repetent) in the contubernium and had to instruct younger scholars. He also lectured on oratory, on Virgil and Livy.

His first publications were an edition of Terence (1516) and his Greek grammar (1518), but he had written previously the preface to the Epistolae clarorum virorum of Reuchlin (1514).

The more strongly he felt the opposition of the scholastic party to the reforms instituted by him at the University of Tübingen, the more willingly he followed a call to University of Wittenberg as professor by Luther, whose influence brought him to the study of Scripture, especially of Paul, and so to a more living knowledge of the Evangelical doctrine of salvation.

Because of the interest in theology shown in his lectures on the Gospel of Matthew and the Epistle to the Romans, together with his investigations into the doctrines of Paul, he was granted the degree of bachelor of theology, and was transferred to the theological faculty.

The composition now known as the Augsburg Confession was laid before the Diet of Augsburg in 1530, and would come to be considered perhaps the most significant document of the Protestant Reformation. While the confession was based on Luther's Marburg and Schwabach articles, it was mainly the work of Melanchthon. Melanchthon's also wrote the subsequent Apology of the Augsburg Confession.

Melanchthon decided to settle into the quiet of his academic and literary labors. In March of 1560 he journeyed to Leipzig and died one month later of complications from a severe cold. His body was laid beside Luther's in the Schloßkirche in Wittenberg.