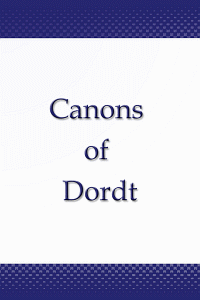 Look Inside
Canons of Dordt or Synod of Dort
Publisher: Wordsearch
Category: Theology

The Decision of the Synod of Dordt on the Five Main Points of Doctrine in Dispute in the Netherlands is popularly known as the Canons of Dordt. It consists of statements of doctrine adopted by the great Synod of Dordt which met in the city of Dordrecht in 1618-19. Although this was a national synod of the Reformed churches of the Netherlands, it had an international character, since it was composed not only of Dutch delegates but also of twenty-six delegates from eight foreign countries.

The Synod of Dordt was held in order to settle a serious controversy in the Dutch churches initiated by the rise of Arminianism. Jacob Arminius, a theological professor at Leiden University, questioned the teaching of Calvin and his followers on a number of important points. After Arminius's death, his own followers presented their views on five of these points in the Remonstrance of 1610. In this document or in later more explicit writings, the Arminians taught election based on foreseen faith, universal atonement, partial depravity, resistible grace, and the possibility of a lapse from grace. The Canons of Dordt rejected these views and set forth the Reformed doctrine on these points, namely, unconditional election, limited atonement, total depravity, irresistible grace, and the perseverance of saints.

The Canons have a special character because of their original purpose as a judicial decision on the doctrinal points in dispute during the Arminian controversy. The original preface called them a "judgment, in which both the true view, agreeing with God's Word, concerning the aforesaid five points of doctrine is explained, and the false view, disagreeing with God's Word, is rejected." The Canons also have a limited character in that they do not cover the whole range of doctrine, but focus on the five points of doctrine in dispute.

This translation of the Canons, based on the only extant Latin manuscript among those signed at the Synod of Dordt, was adopted by the 1986 Synod of the Christian Reformed Church. The biblical quotations are translations from the original Latin and so do not always correspond to current versions. Though not in the original text, subheadings have been added to the positive articles and to the conclusion in order to facilitate study of the Canons.

The Canons of Dordt are often combined with two other Protestant Christian documents, the Heidelberg Catechism and the Belgic Confession of Faith, in forming the basis of Faith for many Churches, especially Reformed Churches. Among these three documents, the Canons of Dordt are unique in being the only one of the three confessions which was actually composed by an ecclesiastical assembly, the Great Synod of 1618-1619.