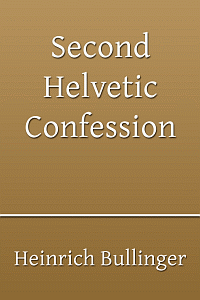 This Second Helvetic Confession (in Latin: Confessio Helvetica posterior) was the personal work of Heinrich Bullinger. It was originally written in 1562 as Bullinger's personal confession as a codicil to his will. It later came to the attention of church officials and was adopted by the churches of Switzerland in 1566 and other Reformed churches throughout Europe in the years following.

It is wide-ranging, covering basic theological issues, but also dealing with a host of practical matters related to issues facing the Protestant Church in Europe following the Reformation.

Heinrich Bullinger, born July 18, 1504, was a Swiss reformer, the successor of Huldrych Zwingli as head of the Zurich church and pastor at Grossmünster. His importance has long been underestimated; recent research shows that he was one of the most influential theologians of the Protestant Reformation in the 16th century.

At 12 years of age, Bullinger was sent to the distant but celebrated gymnasium of Emmerich in the Duchy of Cleves. In 1519, at the age of 15, his parents, intending him to follow his father into the clergy, sent him to the University of Cologne. Bullinger began a systematic program of reading that started with Peter Lombard's Sentences, then compared the Sentences with the church fathers that Lombard cited and with the Bible. In 1520, he moved on to a consideration of Luther's treatises and concluded that Luther was more faithful to the church fathers and the Bible than Lombard. Now a convicted follower of Martin Luther, Bullinger renounced his previous intention of entering the Carthusian order.

In 1522, Bullinger returned home, accepting a post as head of the cloister school at Kappel. At the school, Bullinger initiated a systematic program of Bible reading and exegesis for the monks there. He heard Zwingli and Jud preach several times during this period. During this period, under the influence of the Waldensians, Bullinger moved to a more symbolic understanding of the Eucharist. He contacted Zwingli with his thoughts in September 1524. In 1527, he spent 5 months in Zurich studying ancient languages and regularly attending the Prophezei that Zwingli had set up there. While there, he impressed the Zurich authorities and they sent him with their delegation to the Berne Disputation - there he met Bucer, Blaurer, and Haller for the first time. In 1528, at the urging of the Zurich Synod, he left the Kappel cloister to become a regular parish minister.

After the defeat at Battle of Kappel (October 11, 1531), where Zwingli fell, the Aargau region (including Bremgarten) had to return to the Catholic faith. Bullinger and two other pastors had to leave the town, though the people did not like to see them go. In December of the same year, he was, at the age of 27, elected to be the successor of Zwingli as antistes of the Zurich church. A strong writer and thinker, his spirit was essentially unifying and sympathetic, in an age when these qualities won little sympathy. Bullinger played a crucial role in the drafting of the Second Helvetic Confession of 1566. What eventually became the Second Helvetic Confession originated in a personal statement of his faith which Bullinger intended to be presented to the Zurich Rat upon his death. In 1566, when the elector palatine introduced Reformed elements into the church in his region, Bullinger felt that this statement might be useful for the elector, so he had it circulated among the Protestant cities of Switzerland who signed to indicate their assent. Later, the Reformed churches of France, Scotland, and Hungary would do likewise.

Bullinger died at Zürich in 1575 and was followed as antistes by his son-in-law Rudolf Gwalther.