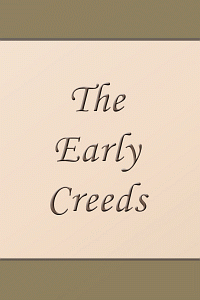 The Apostles' Creed, Latin: Symbolum Apostolorum or Symbolum Apostolicum, sometimes titled Symbol of the Apostles, is an early statement of Christian belief, a creed or "symbol". It is widely used by a number of Christian denominations for both liturgical and catechetical purposes, most visibly by liturgical Churches of Western tradition, including the Latin Rite of the Roman Catholic Church, Lutheranism, the Anglican Communion, and Western Orthodoxy. It is also used by Presbyterians, Methodists, and Congregationalists. The Apostles' Creed, as well as other baptismal creeds, is esteemed as an example of the apostles' teachings and a defense of the Gospel of Christ. The name of the Creed comes from the fifth-century legend that, under the inspiration of the Holy Spirit after Pentecost, each of the Twelve Apostles dictated part of it and thus it is traditionally divided into twelve articles.

The Athanasian Creed (Quicumque vult) is a Christian statement of belief, focusing on Trinitarian doctrine and Christology. The Latin name of the creed, Quicumque vult, is taken from the opening words "Whosoever wishes." The Athanasian Creed has been used by Christian churches since the sixth century of the common era. It is the first creed in which the equality of the three persons of the Trinity is explicitly stated, and differs from the Nicene and Apostles' Creeds in the inclusion of anathemas, or condemnations of those who disagree with the Creed. Widely accepted among Western Christians, including the Roman Catholic Church, the Anglican Communion, and most liturgical Protestant denominations.

The Confession of Chalcedon , also known as the "Doctrine of the Hypostatic Union" or the "Two-Nature Doctrine", was adopted at the Council of Chalcedon in 451 in Asia Minor. That Council of Chalcedon is one of the seven ecumenical councils accepted by Eastern Orthodox, Catholic, and many Protestant Christian churches. The Chalcedonian creed was written amid controversy between the western and eastern churches over the meaning of the Incarnation, the ecclesiastical influence of the emperor, and the supremacy of the Bishop of Rome. The western churches readily accepted the creed, but some eastern churches did not. The creed became standard orthodox doctrine, while the Coptic church of Alexandria dissented, holding to Cyril's formula of the oneness of Christ’s nature as the incarnation of God the Word. This church felt that this understanding required that the creed should have stated that Christ be acknowledged "from two natures" rather than "in two natures".

The Nicene Creed, Latin: Symbolum Nicaenum, is the creed or profession of faith that is most widely used in Christian liturgy. It is called Nicene because, in its original form, it was adopted in the city of Nicaea by the first ecumenical council, which met there in 325 under the rule of Emperor Constantine. The Nicene Creed has been normative to the Anglican and Roman Catholic Eucharistic rite as well as Eastern and Oriental Orthodox liturgies. The Creed is recited in the Roman Rite Mass directly after the homily on all Sundays and Solemnities (Tridentine Feasts of the First Class), and in the Byzantine Rite Liturgy following the Litany of Supplication on all occasions.It is given high importance in the Anglican Church, Eastern Orthodox Church, Assyrian Church of the East, Oriental Orthodox churches, the Roman Catholic Church including the Eastern Catholic Churches and the Old Catholic Church, and most Protestant denominations.