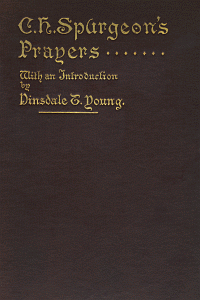 Believers in general will be enriched by this volume because, Spurgeon's prayers were full of doctrine and encouragement from Scripture. But this book should especially appeal to the pastor whose pulpit prayers tend to become stale, repetitious, run-of-the-mill and virtually meaningless. Reading the prayers of great giants of the faith like Spurgeon aid in sharpening the prayers of those who pray publicly.

Lovers of C. H. Spurgeon will delight in this treasury of devotion. It was memorable to hear this incomparable divine when he preached. It was often even more memorable to hear him pray. Who talked with God as Spurgeon did? His congregational prayers--and I heard many--are always echoing in my grateful ear. To those who never heard Spurgeon's glorious voice, these printed prayers will be valuable as suggesting his prophetic power at the Mercy Seat.