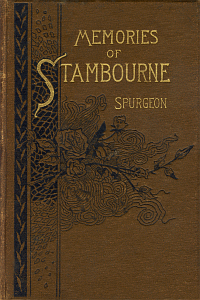 In his little book, Memories of Stambourne, Charles Haddon Spurgeon tells how he would spend many hours in a "little chamber" upstairs in the minister's "manse" (parsonage), reading the old books — "enormous folios, such as a boy could hardly lift."