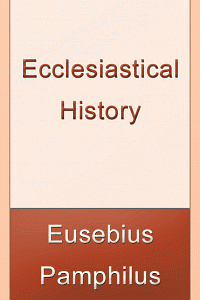 Eusebius Ecclesiastical History is one of the classics of early Christianity and of equal stature with the works of Flavius Josephus. Eusebius chronicles the events of the first three centuries of the Christian church in such a way as to record a vast number of vital facts about early Christianity that can be learned from no other ancient source. When Eusebius wrote his Ecclesiastical History, his vital concern was to record facts before they disappeared, and before eye-witnesses were killed and libraries were burned and destroyed in persecutions by Rome. He faithfully transcribed the most important existing documents of his day so that future generations would have a collection of factual data to interpret. Thus Eusebius (c. A.D. 260-340) richly deserves the title "father of Church history."

About the Author
Eusebius Pamphilus(260-339) was bishop of Caesarea in Palestine and is the author of two very important histories of the Church. His Ecclesiastical History tells the story of the Church from the time of Christ through the persecutions under Diocletian, to (303-313) the proclamation of Christianity as the favored religion of the Roman Empire under the Emperor Constantine.