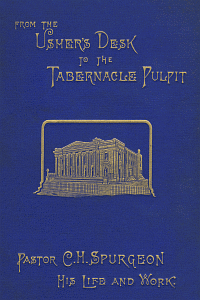 Look Inside
From the Usher's Desk to the Tabernacle Pulpit
The Life and Labors of Charles Haddon Spurgeon
By: Robert Shindler (Author)
Publisher: Wordsearch
Category: Literature, Biographies

From the Usher's Desk to the Tabernacle Pulpit by Robert Shindler, a Baptist pastor and close associate of Charles Haddon Spurgeon. Shindler had known Spurgeon since 1855, and because of their personal relationship Shindler was able to offer unique insights into Spurgeon's life and work that few people could offer.

Robert Shindler, penned the articles tracing the decline of biblical doctrine in the late 17th century up to the late 19th century. He pointed out how some of the Nonconformists, those that were ejected from the Anglican Church because they would not conform to its laws and liturgies, were gradually slipping away from their "old Puritan godliness of life, and the old Calvinistic form of doctrine" to become "less earnest and less simple in their preaching, more speculative and less spiritual in the matter of their discourses, and dwelt more on the moral teachings of the New Testament, than on the great central truths of revelation" So there was less emphasis on the central doctrines of Scripture and more talk on moral and popular issues. "Ruin by sin, regeneration by the Holy Spirit, and redemption by the blood of Christ" were truths conspicuously absent from the pulpits and discussions. Though professing orthodoxy, they seldom preached the orthodox truths that Christians held for centuries. Eventually, some of the pastors and churches headed in the direction of Arianism, denying the biblical teaching of the two natures of Christ, and subsequently, culminating in embracing Unitarianism.

Shindler, with Spurgeon's approval, used this background to set the stage for present concerns. 1859 was a year of great revival in England, especially among the Baptists, but it was also the year that Charles Darwin published The Origin of the Species. Darwin, along with his father and grandfather was raised in a church whose theological foundation had long been eroded. They taught, according to Shindler, "full-blow Socianism," a theological system that denied the inspiration of Scripture, the Trinity, Christ's deity, original sin, the necessity of the atonement, predestination, and the bodily resurrection. Nurtured in that womb of false doctrine, Darwin could make claims against God as Creator.

Accompanying Darwinism was the Higher Criticism of Continental theologians that denied the historicity of some books of the Bible as well as denying certain human authors under divine inspiration. In a climate that welcomed intellectual advances, students were beginning to value science more than theology. This began spilling over into the pulpits of Britain. Shindler recognized the decay, and along with Spurgeon raised the alarm to the churches.

"In the case of every errant course there is always a first wrong step," he wrote. Then giving the example of a mariner, Shindler drove home his point. "If a mariner, having to traverse an unknown sea, does not put implicit confidence in his charts, and therefore does not consult them for guidance in steering the ship, he is, as anyone can see, every moment exposed to dangers of various kinds. Now, the Word of God - the Book written by holy men as they were moved by the Spirit of God - is the Christian's chart." He explained that even though one does not fully understand the charts he still follows them. After the example given, he states his point clearly: "The first step astray is a want of adequate faith in the divine inspiration of the sacred Scriptures. All the while a man bows to the authority of God's Word, he will not entertain any sentiment contrary to its teaching... But let a man question, or entertain low views of the inspiration and authority of the Bible, and he is without chart to guide him, and without anchor to hold him" ["The Down Grade," second article, Sword and Trowel, April 1887].

Before ending with examples of those that held to the doctrine of inspiration, Shindler commented, "The writer is of opinion that the great majority of those who are sound in the doctrine of inspiration, are more or less Calvinistic in doctrine; and that the more the oracles of divine truth are humbly and prayerfully studied, the more closely the student's views will coincide with evangelical truth"

Spurgeon's preface to the same April 1887 issue of Sword and Trowel affirmed Shindler's position as representing his own. However, he made a needed clarification, "We care far more for the central evangelical truths than we do for Calvinism as a system; but we believe that Calvinism has in it a conservative force which helps to hold men to the vital truth, and therefore we are sorry to see any quitting it who have once accepted it" ["Notes," Sword and Trowel, April 1887]. In other words, the Down-Grade problem had more to do with denying the central tenets of Scripture than claiming to be a Calvinist or an Arminian. "The present struggle is not a debate upon the question of Calvinism or Arminianism, but of the truth of God versus the inventions of men. All who believe the gospel should unite against that "modern thought" which is its deadly enemy" . When men gave up the atoning sacrifice of Christ, denied the inspiration of the Scripture, and cast slurs upon justification by faith.