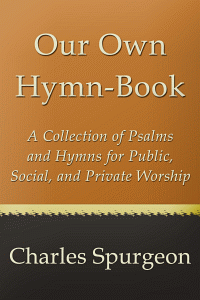 Look Inside
Our Own Hymnbook
A Collection of Psalms and Hymns for Public, Social, and Private Worship
By: Charles Haddon Spurgeon (Author)
Publisher: Wordsearch
Category: Literature, Church & Ministry

At the end of the printed sermons in the Metropolitan Tabernacle Pulpit, there is usually a reference to the hymns sung during the service. These were from the hymnbook published by Spurgeon for use at the Tabernacle, entitled "Our Own Hymn-Book" — a collection of 1,130 hymns, without musical notes. Many of the hymns are quite rare, and some were written by Spurgeon himself. All of the hymns' authors are identified.