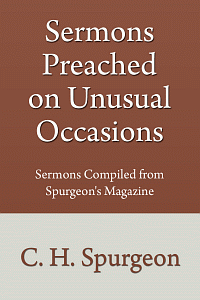 It has been said that 'Spurgeon was never topical but always textual'. In point of fact Charles Haddon Spurgeon frequently preached topical sermons, although in all cases he expounded a text of Scripture in the same sermon. It is hoped that this selection of striking and unusual sermons is circulated, some perhaps in similar unusual occasions (a court witness, one married to an unbeliever, a holiday-maker in a foreign land, and so on) might be spoken to by God the Holy Spirit and be brought to the feet of Spurgeon's Saviour.