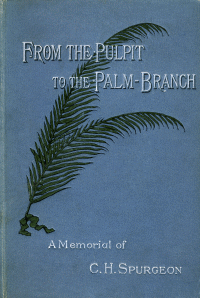 Look Inside
From the Pulpit to the Palm-Branch
A Memorial of C. H. Spurgeon
By: Arthur Tappan Pierson (Author)
Publisher: Wordsearch
Category: Literature, Biographies

From the Pulpit to the Palm Branch is a true celebration of the life of 'The Prince of Preachers' with special focus on the last months of his life, his death and the twelve remarkable days which followed. This rare volume contains the very last addresses delivered by Charles Haddon Spurgeon in the last month of his life.

Spurgeon lovers, and what Christian minister is not, will find great satisfaction in this volume. That even after his misrepresentation by his peers, Spurgeon generated such amazing response even in his death bears testimony to the power and depth of his influence. This volume shows that the power of the gospel is pervasive in every area of life and pursued with faithfulness will change the landscape of culture and Christian ministry.