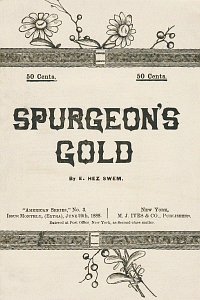 Spurgeon's Gold contains more than 2400 selections—many of them the best of proverbs—from the works of Charles Haddon Spurgeon, the greatest of London preachers, whose sermons and books are read all over the world.

This book will allow his best thoughts to be read and remembered by those who cannot hear him, and have not the leisure to search the voluminous works of the prince of preachers, great author, philanthropist and educator. The quotes are all indexed for easier use.

About the Editor:
The Reverend Edmond Hez Swem’s pastorate was from 1884 to 1910 – the longest pastorate in the history of the Second Baptist Church in Washington D.C. According to an article, “History of sacred music in the District of Columbia” which appeared in the Records of the Columbia Historical Society, Swem was not only one of the best known of the Baptist clergymen of the city, but also a musician. A native of Indiana, Dr. Swem received his education at DePauw University and the Southern Baptist Theological School at Louisville, Kentucky. Ordained in 1881, he held two pastorates before coming to Washington in August, 1884, where he has served the same church for many years. He was also moderator of the Columbia Association of Baptist Churches for a number of terms.