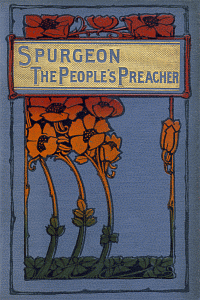 This biography on the life and works of Charles Haddon Spurgeon traces Spurgeon's life and beginnings from the New Park Street Chapel, the opening of the Metropolitan Tabernacle, the start of his pastor's college, the Stockwell orphanage, and finally a review of his life as a commentator and as a servant of God.

Marianne Farningham was an author, editor and lecturer who lived most of her life in Northampton. Born Mary Ann Hearn, her pen name was derived from the name of the Kent village, Farningham, in which she grew up. She later had a second pseudonym, Eva Hope, under which she wrote biographies (the most popular one being Grace Darling, which is still widely available) and edited books of poetry. Despite being engaged briefly, about which little is known, Marianne remained single all her life.

Looking back to her childhood from old age Marianne indicated that she was given little encouragement or preparation for a journalistic career. She recalled her mother's consternation because as a child she preferred reading to 'the brush or the needle' and her father's later worry as to whether she 'could make money by my pen' . Despite this lack of support, however, she grasped all the opportunities she was given. Her education was rather sporadic, but she made the most of it. She was nine before she first went to the new British School at Eynesford, and she spent only a few years there, interrupted for a while by her mother's death when she was twelve. Like many intelligent women in this period she was to a large extent self educated and in old age she still regretted this lack of education.

The main encouragement in her own career came not from her family but from the pastor of her Baptist chapel in Eynsford (close to Farningham), John Whittemore. He was the founder of the Christian World, a weekly evangelical newspaper, to which she contributed from its launch in 1857 until shortly before her death in 1909. For the first ten of those years she also worked as a teacher, initially in Gravesend and from 1859 in Northampton, but from 1867, to her relief, she became a full-time employee of the Christian World. At its peak in 1880, the circulation of this paper was around 130,000 and its readership probably four times that, so many people would have read her short poems and prose pieces. In addition, from 1885 Marianne edited the Sunday School Times, as well as publishing collected editions of her weekly prose pieces, poems and serialised fiction. Some of her hymns found their way into popular collections: 'Just as I am, Thine Own to Be' is possibly the only one now remembered.

In addition to her writing, for several years, in the later 1870s and early 1880s, she gave a series of well-attended winter lectures on subjects such as 'The Women of Today' and 'The Rush and Hush of Life'. Between 1886 and 1892 she was also the only female member of the Northampton School Board. The range of her work indicates that she always remained eager to make the most of her own ability: in fact, she was something of a workaholic, suffering a breakdown in 1889. Charles Haddon Spurgeon, the celebrated Baptist preacher, certainly regarded her as 'famous' and Lloyd George claimed her as one of the influences on his childhood . She received regular correspondence from readers, and some at least attested that she had helped to shape their lives. Marianne Farningham would have been a household name in many Victorian households.

Out of the proceeds of her writing and lecturing she bought a house in Northampton, at 14 Watkin Terrace, which she shared over the years with a variety of friends and relatives: her father, several nieces and some companions as well as a servant. It was also open to members of her girl's class, who visited her for advice and encouragement. In later life she also permanently rented a little cottage in Barmouth with a stunning sea view. She retreated here as often as possible, commenting that 'here have gracious summer-times almost renewed my youth, and caused my heart to sing for joy. How much I wish everybody could have such a haven!'

Marianne is interesting for several reasons. It is possible to use her life to track changes within popular evangelicalism. Some of these changes are reflected in her own life, others in her writings. She moved from a village Baptist chapel with narrow Calvinist views and a clear belief in hell to an almost universalist understanding, and from a strong Sabbatarian belief to an acceptance that for working men, enjoying the countryside on a Sunday could be a kind of religious experience. In her early writings, she is scathing about the idea of 'women's rights' but later, especially when writing as Eva Hope, she expressed feminist sympathies. Whilst she did not move in what could be termed the feminist world, she reflected some of its attitudes, believing for instance that women should be encouraged to earn their own living (if their domestic arrangements were satisfactory), and that female householders should have the vote. The religious belief system she shared with her readers gave her an opening to influence the opinions, and to engage the sympathy of, the Nonconformist public with regard to the role of women, in a way that someone with an overtly feminist stance could never have done. As a journalist, Marianne was in a particularly advantageous position to contribute to such a process.

On Friday 19 March, 1909, a crowd of Northampton residents turned out for Marianne's funeral. She had died three days previously at the age of 75. On the day of her funeral, according to the Northampton Daily Chronicle, 'sorrowing friends began to gather' long before the time for the service, 'and if one fact struck the observer more than any other about the personnel of the congregation it was the very large number of ladies who had come under Miss Hearn's teaching in her Class'. Nationally, she might have been known as a writer, but locally, she was known primarily as the leader of her girl's Sunday school class. She was a woman who, it seemed, had a gift for friendship, especially with the young, and she made her mark on those who knew her, whether personally or through the pages of her books.