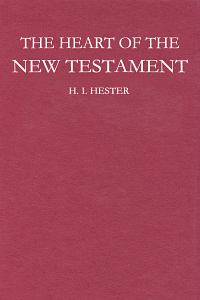 The Heart of the New Testament is a standard textbook that introduces you to the New Testament, zeroing in on the life of Christ and then surveying the expansion of the early church. Perfect for college freshmen and sophomores, as the text is written in narrative form.

Dr. Hubert Inman Hester (1895-1983) graduated in 1921 from the Southern Baptist Theological Seminary in Louisville. He was the pastor at Beech Fork Baptist between 1920-1923. He left Beech Fork to teach at Furman University from 1924-1926 and was also the pastor of Reedy River Baptist Church from 1925-1926. Hester was the Head of the Department of Religion at William Jewel College in Liberty, Missouri from 1926-1961; and Vice President of Midwestern Seminary in Kansas City from 1961-1974. He is the author of the endowed lectureship on preaching at Golden Gate Seminary in California that was named in his honor in 1968.