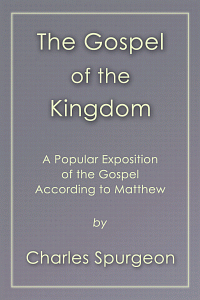 Look Inside
The Gospel of the Kingdom
A Popular Exposition of the Gospel According to Matthew
By: Charles Haddon Spurgeon (Author)
Publisher: Wordsearch
Category: Commentaries

The Gospel of the Kingdom is distinctly known as Charles Haddon Spurgeon's only complete commentary of a New Testament book; with his only other commentary being The Treasury of David. He devoted two winters spent in the South of France to the production of this exposition. It was nearly finished when Spurgeon died. It was completed from his own spoken and written words (previously transcribed), by Mrs. Spurgeon and Mr. J. W. Harrald, his secretary; together they finalized several more of his works posthumously.

It has all Mr. Spurgeon's characteristics, his simple unquestioning faith, his command of nervous telling Anglo-Saxon, his ready wit and forcible application of religious doctrine to daily life and conduct