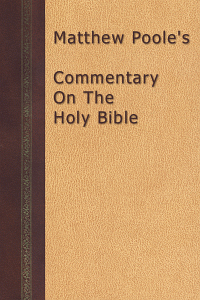 This three-volume set by Matthew Poole is only rivaled by Matthew Henry's Complete Commentary on the Whole Bible. An in-depth, verse-by-verse, devotional commentary, this is a must have for any reference library.

Poole's commentary was originally published in 1685, not long after the completion of the King James Version of the Bible. He meticulously poured over the commentary material of his day, incorporating the best of the available scholarship into his work.

Matthew Poole (1624 - 1679) was an English Nonconformist theologian. He was born at York, and educated at Emmanuel College, Cambridge.

From 1649 till the passing of the Act of Uniformity 1662 he held the rectory of St Michael le Querne, London. Frightened by the reaction to his tract on the Nullity of the Romish Faith, Poole left England in 1678 and passed his last years in Amsterdam. He died there in 1679. A complete biography of Poole was published by Thomas Harley in February 2009.

The work with which his name is principally associated is the Synopsis criticorum biblicorum (5 vols fol., 1669-1676), in which he summarizes the views of one hundred and fifty biblical critics. This book was written in Latin and is currently being translated into English by the Matthew Poole Project. Poole also wrote English Annotations on the Holy Bible, a work which was completed by several of his nonconformist brethren, and published in 2 volumes in 1683. The work was continued by others (last edition, three volumes, 1840).

If I must have only one commentary, and had read Matthew Henry as I have, I do not know but what I should choose Poole. He is a very prudent and judicious commentator . . . not so pithy and witty by far as Matthew Henry, but he is perhaps more accurate, less a commentator, and more an expositor.