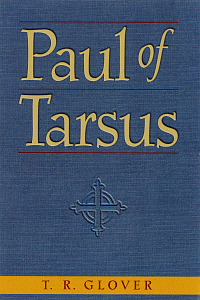 Paul of Tarsus provides a new generation of student and scholar with the opportunity to benefit from this excellent examination of the figure of Paul in the light of his Greco-Roman origins.

Terrot Reavely Glover, 1869-1943, was the eldest son of Richard Glover, a Baptist minister from Bristol. He was admitted to St John's as a scholar in 1888 and after gaining a first in both parts of the Classical Tripos, was elected a Fellow of the College in 1892. Four years later he went to Canada to take up the post of Professor of Latin at Queen's University, Kingston, Ontario. He returned to St John's as a teaching Fellow in 1901, and in 1911 was appointed to a University Lectureship in ancient history. He was Public Orator Emeritus of Cambridge University, England and was twice Proctor.

Glover was a prolific author. Many of his books and essays were on a classical themes, Studies in Virgil, Herodotus, Democracy in the Ancient World, and Greek Byways being just a few of his titles. His restless intellect also took in other themes. Poets and Puritans, 1915, included essays on Bunyan and Boswell. The Jesus of History, 1917, made Glover's name known to thousands of non-classicists, while A corner of Empire: the old Ontario Strand, 1937, reflected his deep love of Canada, fostered during his five years' residence. Glover was also known as an avid letter writer, his thoughts on many subjects appearing frequently in the pages of The Times. A deeply religious man, Glover was immensely proud of being elected to the post of President of the Baptist Union in 1924.

Glover's Paul of Tarsus has become a classic not merely because of its erudition, wisdom, and refreshing independence, but also because it leads us so convincingly to the heart of Paul. By placing Paul fully in the historical context of the first century, including especially the Greek world, the mystery religions, and apocalypticism, Glover helps us repeatedly to see Paul's striking distinctiveness.