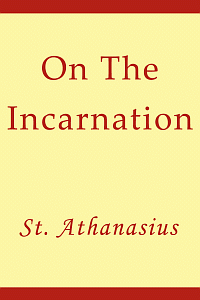 St. Athanasius stood contra mundum for the Trinitarian doctrine "whole and undefiled," when it looked as if all the civilized world was slipping back from Christianity into the religion of Arius, into one of those "sensible" synthetic religions which are so strongly recommended today and which then, as now, included among their devotees many highly cultivated clergymen. The glory of St. Athanasius is that he did not move with the times; it is his reward that he now remains when those times, like all others, have passed away.

Athanasius of Alexandria, c. 293 – 2 May 373 , also given the titles Athanasius the Great, Pope Athanasius I of Alexandria, and Athanasius the Apostolic, was a Christian theologian, bishop of Alexandria, Church Father, and a noted Egyptian leader of the fourth century. Athanasius received his philosophical and theological training at Alexandria. He was ordained as a deacon by the contemporary patriarch, Alexander of Alexandria, in 319. In 325, he served as Alexander's secretary at the First Council of Nicaea. Athanasius spent the first years of his patriarchate visiting the churches with people of his territory, which at that time included all of Egypt and Libya. During this period, he established contacts with the hermits and monks of the desert, including Pachomius, which would be very valuable to him over the years. He is best remembered for his role in the conflict with Arius and Arianism. At the First Council of Nicaea, Athanasius argued against Arius and his doctrine that Christ is of a distinct substance from the Father.

Saint Athanasius died peacefully in his own bed, surrounded by his clergy and faithful. Athanasius is a Doctor of the Church in the Catholic Church in communion with the Bishop of Rome, and he is counted as one of the four Great Doctors in the Eastern Orthodox Christian tradition. Athanasius' feast day is 2 May in Western Christianity, 15 May in the Coptic Orthodox Church, and 18 January in the other Eastern Orthodox churches.