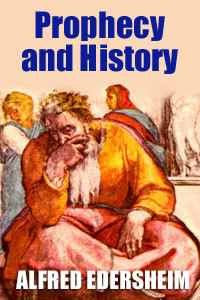 Look Inside
Prophecy and History in Relation to the Messiah
By: Alfred Edersheim (Author)
Publisher: Wordsearch
Category: History & Culture

The heart-felt goal of Alfred Edersheim's books was to help the average Christian gain a better understanding of the Jewish customs and the historical significance behind Scripture.

This work which chronicles Edersheim's Barburton Lectures from 1880-1884, discusses the prophetic history of the Messiah from the time of Garden of Eden to the coming of John the Baptist. Unlike Edersheim's other works, this volume involves a much higher degree of criticism on the topic of prophesy, and other sub topics such as prophetic and heathen divination, the moral element in prophecy, true and false prophets, the progressive character of prophecy, and its spiritual element.

Some of Alfred Edersheim's most widely read works are: The Life and Times of Jesus the Messiah, Sketches of Jewish Social Life and The Temple: Its Ministry and Services.