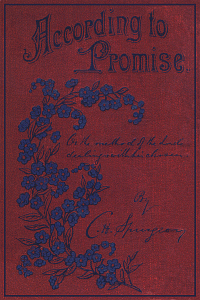 Look Inside
According to Promise
The Lord's method of dealing with His chosen people
By: Charles Haddon Spurgeon (Author)
Publisher: Wordsearch
Category: Theology, Apologetics

These promises are for every believer, yet each will admit to not fully experiencing what is promised. Charles Spurgeon helps us to appreciate that all God's promises are the birthright of each Christian. It is not presumptuous or unreal to expect to enjoy what God has promised for us. We are to measure what the Lord can do by His generous promises rather than by our selfish level of expectation. In According to Promise, Spurgeon affirms his concrete and unshakable faith in the veracity of God's covenant promises to His elect.

It is an eminently practical volume, the fruit of a ripe experience; as simple in its form as it is searching in its exposure of counterfeit religion; and we have no doubt that many will have reason to rejoice that they made its acquaintance. As Mr. Spurgeon remarks in one of his homely sentences, 'he who looked into his accounts and found that his business was a losing one was saved from bankruptcy.