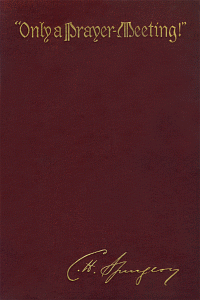 Charles Haddon Spurgeon used to address his church at midweek meetings as well as the powerful sermons on Sundays. These addresses were generally more informal in tone and were designed to supply motivation for the church to pray. They are classic Spurgeon in a shorter format.

Together this collection is charming, challenging and cheering! If you wanted to find out how Spurgeon fuelled his church for everyday Christian living and a life of prayer then there is no better starting place.

About the Author
Few people in history can be known by one name and have it ring true with their audience, and "Spurgeon" is one of them. Over time, Spurgeon has become known and revered as the "Prince of Preachers". In the last 200 years he has been one of the most influential men for not only Preachers of the Gospel but for those who have not had the opportunity to hear and receive the Gospel message. He wrote tirelessly over his life, and WORDsearch Bible Software is committed to bring as many of Spurgeon's works as possible to you in electronic form.