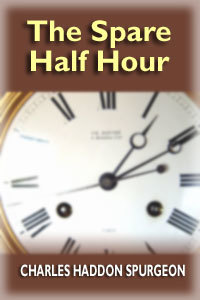 These occasional papers, rescued from the pages of our monthly magazine, The Sword and the Trowel, are preserved in this form from the oblivion which awaits the bulk of periodical literature. We are in hopes that spare half-hours may be profitably spent in reading these brief essays. The Spare Half Hour should be allowed to lie about in the parlor, the kitchen, or the waiting-room: it may catch the eye by its title, and interest by its contents. Our life has been mainly spent in direct religious teaching, and to that work we would dedicate our main strength; but men need also to hear common every-day things spoken of in a religious manner, for to some of them this roundabout road is the only way to their hearts. Theology is dull reading to the unconverted; but mixed with a story or set forth by a witty saying, they will drink in a great amount of religious truth and find no fault. They like their pills gilded, or at least sugar-coated, and if by that means they may be really benefited, who will grudge them the gilt or the sugar?

As full of good things as an egg is of meat. Its treatment of the epidemic of skepticism is thorough.