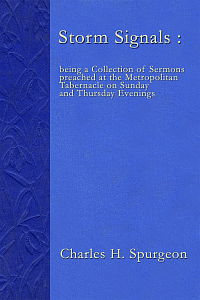 Look Inside
Storm Signals
being a Collection of Sermons preached at the Metropolitan Tabernacle on Sunday and Thursday Evenings
By: Charles Haddon Spurgeon (Author)
Publisher: Wordsearch
Category: Sermon Helps, Sermons

Considered by The Christian Age as the best sermons ever preached by Charles Haddon Spurgeon, Storm Signals features 20 sermons preached on Thursday and Sunday evenings at the Metropolitan Tabernacle. Extremely practical in nature, a must have for any preacher.

The discourses are marked by the fluency and fervour of our great preaher. Like all his works, they are intensly practical, and cannot fail to exert a gracious influence wherever they are read.