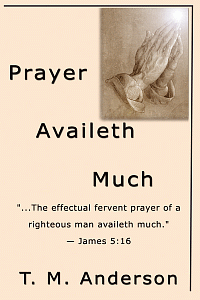 The brief messages on prayer contained in Prayer That Availeth Much have been written for the purpose of stimulating a greater interest in the importance of praying without ceasing.

Tony Marshall Anderson was convinced that the people of God have not explored the boundless possibilities of prayer. We all evidently believe that the effectual fervent prayer of a righteous man availeth much, but we are often aware of the fact that very little has been accomplished by our own prayers.

It has not been possible to present a complete study of the subject of prayer revealed in the Holy Scriptures. For one to undertake such a task would be like an attempt to measure eternity by a span.

Tony Marshall Anderson was born in 1888. He was an evangelist and a college professor, and was associated with the Methodist Episcopal Church and the Church of the Nazarene. He was convinced that the people of God have not explored the boundless possibilities of prayer. He died in 1979.