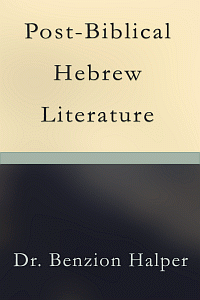 Studying Jewish literature from any time period offers unique insights into the Scriptures that are sometimes easily overlooked. Post-Biblical Hebrew Literature is a survey of Hebrew literature, including extracts from the Mishnah, the Talmud, the Midrashim, and from the writings of great rabbis through the Middle Ages and later.

Benzion Halper (1884-1924) was born in Lithuania, but lived in Germany and England in his youth. In 1911, he moved to the United States to work with genizah; depositories of sacred books, in New York. Shortly thereafter, he began teaching rabbinics and languages at Dropsie College, and also was custodian of manuscripts there.