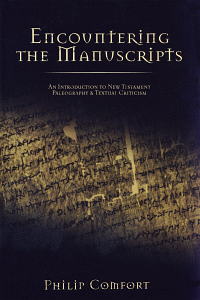 Based on his exhaustive experience and study, author Phillip Comfort:

Philip Wesley Comfort earned his doctoral degree from the University of South Africa. He has studied English literature, Greek, and New Testament at the Ohio State University and the University of South Africa. He has taught these classes at a number of colleges, including Wheaton College, Trinity Episcopal Seminary, Columbia International University, and Coastal Carolina University. He is currently senior editor of Bible reference at Tyndale and served as New Testament editor for the New Living Translation. He has contributed a number of books to the Tyndale collection, both as author and editor. Among these are The New Greek-English Interlinear New Testament, The Origin of the Bible, Essential Guide to Bible Versions, The Text of the Earliest New Testament Greek Manuscripts and Who's Who in Christian History.