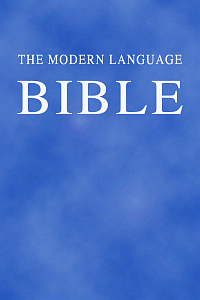 The Modern Language Bible;The New Berkeley Version in Modern English,1969, is a simple, clear, and accurate translation, written in contemporary English. It is a useful resource for pastors, students and laypeople.

The first edition of the The Berkley Version of the Bible in Modern English,1959, was the work of Gerritt Verkuyl. Verkuyl was a dutch born emigrant and although most of his education was in America, English was not his primary language. The idea of this version was planted during his undergraduate studies at Park College in Missouri where a professor instilled in him a love for Greek. Verkuyl began comparing the Greek New Testament with the King James Version and the Dutch Bible he was most familiar with. Verkuyl determined that his Dutch Bible was more faithful to the Greek, and he longed for a modern and accurate version to be made available in his newly adopted tongue, English. Yet, Verkuyl's career got in the way of his idea for a new translation, and work did not actually begin on it until he reached retirement at the age of 65.

In 1936 Gerrit Verkuyl began working on his modern language New Testament. A year later he moved to Berkeley, California, and in 1939 he retired from the Board of Christian Education so that he could devote his full energies to his translation. Borrowing the name of his new home, Verkuyl published the first edition of the Berkeley Version of the New Testament in 1945. Verkuyl based the the original New Testament on the 8th edition of the Greek text of Tischendorf, and in consultation with the Nestle text of his day. Eventually, there was interest in creating a complementary Old Testament as well. Such a large project as an Old Testament translation was outside the bounds of Verkuyl's abilities, especially at his advanced age. But a team of nineteen Hebrew scholars were put together who worked under Verkuyl's supervision to create a new translation of the Old Testament using the same principles and guidelines that Verkuyl had followed in translating his New Testament. The Old Testament is significant because it was one of the first English translations to take advantage of the newly discovered Dead Sea Scrolls.

In 1969 the publishers appointed three Bible Scholars to revise the Berkeley New Testament. This revision, not a re-translation, uses less formal pronouns in referring to Christ and quotation marks for any words spoken by God or Jesus were also added to the New Testament. The 1969 edition also received a new name: The Modern Language Bible: The New Berkley Version in Modern English.