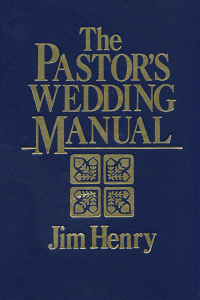 A collection of creative wedding ceremonies and helps to guide a pastor in making the wedding service a worshipful experience.

About the Author
Jim Henry, native of Nashville, Tennessee, is a graduate of Georgetown College in Kentucky and earned his B.D., M. Div. Degree from New Orleans Baptist Theological Seminary. Henry pastored churches in Alabama, Mississippi and Tennessee. Henry served as Senior Pastor of First Baptist Church of Orlando from 1977 to 2006. While under Henry's leadership, First Baptist Orlando outgrew its downtown campus and moved to the present John Young Parkway campus, opened a community crisis pregnancy center and opened The First Academy, a K-12 Christian school. When he retired he was given the honorary title of Pastor Emeritus. He has held many positions of leadership including President of the Southern Baptist Convention from 1994-1996. An auditorium at Lifeway Christian Resources’, Ridgecrest Conference Center, in North Carolina is named “The Dr. James B. ‘Jim’ Henry Auditorium,” in his honor.