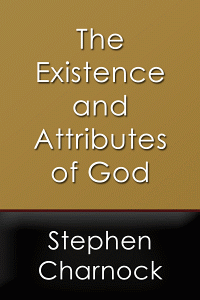 Look Inside
The Existence and Attributes Of God
By: Stephen Charnock (Author)
Publisher: Wordsearch
Category: Theology

Although written in the seventeenth century, The Existence and Attributes of God remains a classic, exhaustive treatment of the doctrine of God by Puritan Stephen Charnock.

Charnock reflects on Scripture to draw out its full implications for understanding the God of the Old and New Testaments. The practical aim of these meditations is godly living so that increased knowledge leads naturally to greater obedience and more heartfelt worship.

In this book, Charnock meticulously works through the doctrines of God's power, patience, holiness, wisdom, knowledge, dominion, goodness, and immutability. From this multifaceted discussion of God's qualities Charnock blends one inspirational, devotional, and scholarly whole.

Stephen Charnock was an English Puritan Presbyterian clergyman born at the St Katherine Cree parish of London in 1628. Charnock studied at Emmanuel College, Cambridge, during which he was converted to the Christian faith, beginning his spiritual journey as a Puritan divine. After leaving the college, he possibly held a position as either a private teacher or tutor, then moving on to become a minister of the faith in Southwark for a short time, converting individuals to Christianity. He continued on to New College, Oxford, where he earned a fellowship and gained a position as senior proctor.

Charnock moved to Ireland in 1656 where he became a chaplain to Henry Cromwell, governor of Ireland. In Dublin, he began a regular ministry of preaching to other believers. Those who came to hear him were from different classes of society and differing denominations, and he became widely known for the skill by which he discharged his duties.

In 1660, the monarchy of England was restored after its brief time as the Commonwealth of England, and Charles II ascended the throne of England, Scotland, and Ireland. Due to new restrictions, Charnock was now legally prevented from practicing public ministry in Ireland, and in England where he returned. Nevertheless he continued to study and to minister in non-public ways.

Charnock began a co-pastorship at Crosby Hall in London in 1675; this was his last official place of ministry before his death in 1680. Nearly all of the numerous writings attributed to him were transcribed after his death, one of the most famous of which was the one preached at Crosby Hall in 1682. It was a massive work that ran to some thirteen hundred pages in the first American printing. It is preserved today as The Existence and Attributes of God.

When, unexpectedly the essence and attributes of God are called into question, to whom else can we go better than to Stephen Charnock?