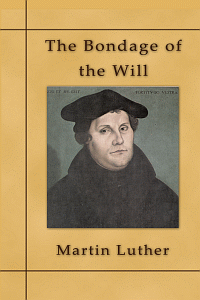 Look Inside
The Bondage of the Will
By: Martin Luther (Author)
Publisher: Wordsearch
Category: Theology

An English translation of one of the basic documents of the Reformation. Martin Luther's theology and his key doctrines, the sovereignty of the Divine Grace in man's salvation and the importance of justification through faith are here fully developed.

About the Author
Martin Luther was born the son of the miner, November 10, 1483 in Eisleben, Germany. He later became an Augustinian monk, and then an ordained priest.

A trenchant answer to Erasmus. Luther's theme here is vital to an understanding of his teaching and underlines the rediscovery by the Reformers of the true extent of the Fall upon nature. The volume has a lengthy and excellent historical and theological introduction.