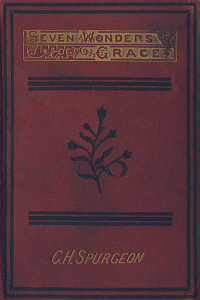 Spurgeon writes, "Out of the proclamation of the amazing story of the love of Jesus other wonders grow, for signs and wonders are the witness of the gospel's power."

In Seven Wonders of Grace, Spurgeon displays the wonders of God's forgiveness toward the once-deceitful Manasseh; His mercy toward the woman who washed Jesus' feet; His promise to the thief on the cross; His grace toward Saul of Tarsus; His miraculous work before the eyes of the Philippian jailer; His reclaiming of Onesimus' life.