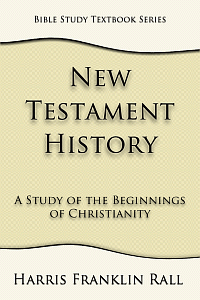 This book from Dr. Harris Franklin Rall, breaks down the New Testament history from the birth of Jesus Christ to the Jerusalem Church through the ministry of Paul and the Roman Empire, and the later Church of 600-700 A.D.

About the Author
Harris Franklin Rall (1870-1964), Ph. D. was the first president of Iliff School of Theology in Denver, Colorado from 1910- 1915. He also served as Henry White Warren professor of Practical Theology. Rall authored twenty-four books like the Teachings of Jesus, New Testament History, Christianity, an Inquiry into Its Nature and Truth, and A Working Faith. His work on the teachings of Jesus reflected the values of early liberalism. Rall later became president of Garrett Biblical Institute in Evanston, Illinois.