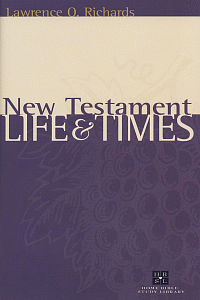 What is a Bible Background Commentary?

Commentaries are among the most important books any Christian can own, for commentaries are dedicated to helping the reader better understand the Bible.

Yet commentaries vary in focus. New Testament Life And Times is a special type of reference tool. It is intended to provide enrichment information for the communicator of God's Word. In seventy-seven teachable units this volume covers the whole of the New Testament. It draws on a variety of sources to provide background which illuminates the text and guides its application to people today. And because the goal of the book is to serve the lay Bible teacher and preacher, special attention is paid to those passages which are most teachable and preachable.

Each chapter includes the following features:

Also included in many of the units are sidebars that contain quotes from primary historical sources, charts, or relevant research.