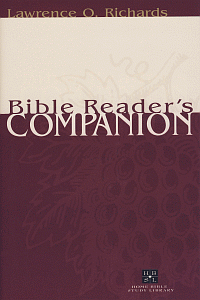 Look Inside
Bible Reader's Companion
Your Guide to Every Chapter in the Bible
By: Lawrence Richards
Publisher: David C. Cook
Category: Commentaries

Once again I'm grateful to Larry Richards for another very valuable tool which will help people not only get a better grasp on the Bible, but will also challenge and help them live according to its precepts. If you were to read through the Bible in a year with The Bible Reader's Companion at your side, you'd have a whole new and exciting grasp of the Word of God--and you'd have truth to live by each day. I cannot wait to begin . . . reading through the Bible with this book.