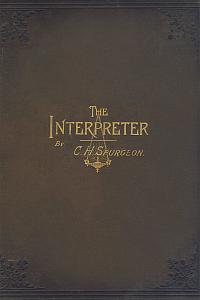 The largest book that Charles Spurgeon produced was The Interpreter. It consists of selected Scriptures for each morning and evening in the year, with a homily and hymns. But Spurgeon did not approve of printing prayers, it lacks the very thing which would commend it to many families. It is as big as a family Bible, and in past years was often found in Christian households.

About the Author
The details of Charles Haddon Spurgeon's life still continue to amaze one and all. He was born in Kelvedon, Essex, England, on June 19, 1834. He accepted Christ in 1850 at the age of 15. By age 16, he preached his first sermon in 1851, and by age 20, Spurgeon had already preached over 600 sermons. In 1854, Spurgeon was asked to become pastor of the New Park Street Chapel, one of the sixth largest Baptist Churches in London.

The impress of Mr. Spurgeon's genius is observable in the very felicitous arrangement of the passages of Scripture as well as in the characteristic running comments, in which latter, by the way, Mr. Spurgeon theological views come preeminently to the front.